On his brand new blog Gotch.info, Gotch talks about the recording session of his new solo album "Good New Times", where he tries to explain the studio mood, how things took place and gives more details about some songs recorded with the band The Good New Times. The following relates the recording during day 9 to day 13. 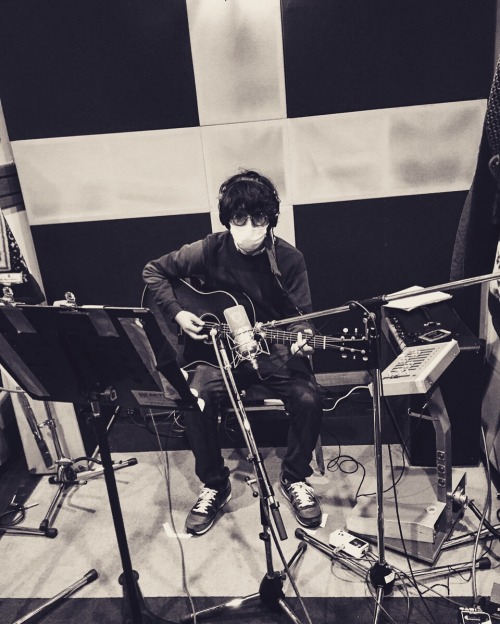 This is the ninth recording day. Everyone is nervous, possibly due to accumulated fatigue from the past few days. Thus, we’ve recorded acoustic guitars in a melancholic way. Acoustic guitars have a few aspects similar to percussion instruments, and the way the strings ring have been recorded in a wake that cannot be faked. As a result, it is also difficult to have an opinion about its quality. The recordings could have become rather austere, but the group livens it up, and we worked with enthusiasm. Inoue-kun of Turntable Films played with us on our last tour, and is also taking part on this album. He helps me with his innate sense for guitars, synthesizer arrangements, or even with production. We also have similar taste in music, and when we give two or three ideas, he gives us back ten, or even twenty, so, I can rely a lot on him.

Even between sessions, he continues playing guitar. Sometimes we wonder what he is doing in front of his computer screen. Actually, every time he is in front of the screen, he is browsing through a lot of effects pedals’ websites, and looking at crazy ways of playing various sounds that come to mind.

He is also wonderful as the lead singer and songwriter in Turntable Films, so I’d like to show this genius and his music to a lot of people, and other members of the Gotch Band agree.

We couldn’t finish this second album without his help, so when you listen to it, I hope that you will pay attention to the guitar sounds and noises. That is, when the album is available, of course.

Then, it was Symoryo’s turn with synths and organs dubbing. Symoryo integrated an arrangement which made me wonder if it was still my song. He is absolutely not the kind of person to give up saying, “it’s good, it will be fine like this.” Me, I am rather the kind of person to play to the gallery, so I tell myself that I must follow his example while playing with this difference in personality.

Regarding the solo recording, this time the Gotch Band members suggested a lot of ideas. Usually a solo is about drawing attention and having full control of it, but the second album recording progresses within a very important group dynamic. Sometimes, I worry about relying too much on the others, but I also think about the way I will do things. I just want to focus on producing a good album. Nada Surf’s [Lead Singer] Matthew had arrived in Japan. Matthew [Caws] took care of the guitar dubbing of the song we did together in Cologne, Germany. To be honest, Matthew did almost everything.
I think I met Nada Surf at least 10 years ago. I was dying to see them here in Japan, so I decided to improve my skills and invited them to Japan to meet them.

Thereafter, we got along well with one another, and we even did a tour together. They came to meet us while we were recording in New York, and our relationship carried on. It was very strange before we met, as I was just one of their fans.
Here are some of their song lyrics from “Life is too Long,” written by Matthew.

It’s kind of a sad song, and beautiful at the same time, because its meaning is “we keep mistaking; so life is long enough;” I like this part from the bridge of the song. I respect him a lot, as a musician and a poet. Today, instrument recording is almost complete. There is a possibility that we do make some slight modifications, but at the moment, the recording we had planned to do, and those who appeared by happenstance, is done. We’re only at the point of hearing rough mixes, but they already sound beautiful; so much that I could shed a tear from my eye.

After recording and following what Chris wants, we went to eat monjayaki, a more fluid variation of okonomiyaki, a type of Japanese salty crepe made of various ingredients. Matthew from Nada Surf came with us; it was a joyful evening. Mike, the assistant engineer, seemed to have fun, too.
Two days left to finish this magical work, and I’m to know that this is about to end. Vocals recording. Recording songs in English is a little different from songs in Japanese. The main reason, is the feeling, the way to catch the rhythm and intervals between two notes differ from English, but it’s very difficult to explain. In a relative way, in Japanese, the intervals and vowel intonation are very important. But when in English, we give more significance to consonants and speed.

Today, I had difficulties with the S and SH pronunciation. One could ask, how could it be so difficult? But it’s different when you say it while singing. Pronunciation problems are complex, and there are cases where I do my best to clearly pronounce L and R in English. There are also cases where, at the contrary, I speak a very Japanese variant of English; this is very strange.

Today, two Americans and one Englishman helped us out and we finished recording four songs. The vocals and main melody guide me through adapting their English in a way that natives would find it very natural to hear. English and Americans express themselves differently; I find his very funny.