On his brand new blog Gotch.info, Gotch talks about the recording session of his new solo album "Good New Times", where he tries to explain the studio mood, how things took place and gives more details about some songs recorded with the band The Good New Times. The following relates the first four recording days. 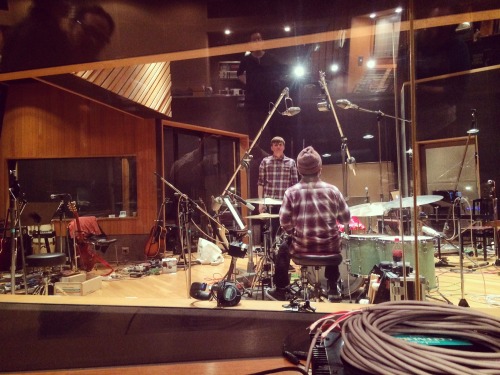 Solo recording has started. I played the majority of instruments on the first album, Can’t Be Forever Young, and had asked John McEntire who had been living in Chicago, to take care of the mixing. It was a “partially home-made” record.

This time, the album was recorded in a large studio with all of the members (of my band) who played on the first album’s tour. The band is very fun to work with, as they are very reactive. When it comes to writing and recording, I’ll submit an idea, and in return, they’ll submit a dozen of different suggestions, so there’s never a stalemate; they bring new colors to my ideas.

Furthermore, the band has a fussy interest with effects pedals, synthesizers, and other equipment. I’m very happy to have many instruments appearing in each song. Each of us are fond of various instruments, but when I’m out to buy various types of strange pedals, they are against it; which I find even funnier.

It became a sort of fascinating pride, that actually, said fascination, became a part of the album packaging. For instance, it is not I feel particularly fascinated when I'm told, in a direct way, that "my songs are unusually happy", but I'm convinced it can be said from people who work for the music liveliness and dynamism, I believe it’s similar to the joy that we feel when a treasure is discovered in the back of a drawer, rather than being in a simple, joyful location.

I had asked for help from Chris Wala, who had worked with Death Cab For Cutie for many years. He, alongside his assistant engineer, are very inspiring. They are doing numerous tests with mics to alter the sound, and I was moved by the warming sounds from their old tape recorder that was used in the recordings. To rub shoulders with the production work of people I’ve always admired, I’m convinced, will be a plus in my career. 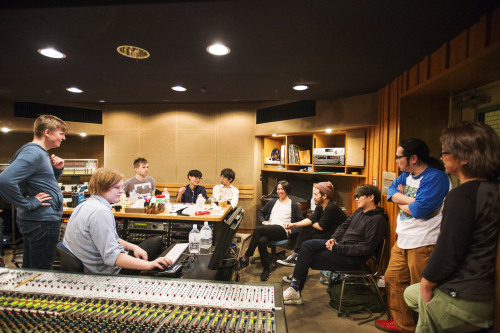 The studio is a very stimulating environment. Chris’ production work is clear and enlightening; it distinctly guides me to always give myself fully to the work I do. While working with fellow Japanese [artists, producers], they often express eighty different ideas, and we end up reaching about a hundred altogether. However, when I work with western producers and engineers, they start by clearly exposing and valuating their ideas and opinions. I think that we should follow that kind of example.

Then, during recording, they gave positive feedback such as “cool” or “great.” They barely used negative or paradoxical words like, “but.” People using such positive language lightened the room, too. In Japan, we talk about “kotodama,” [ndt. “language soul”], and it’s very interesting when this soul can be felt from English interlocutors. This is also, in a sense, why I want to follow their example.
Aside from that, I learn new things with the mic and Chris is happy for each intervention. This is a very good experience. One-take recording continues. During today’s session, I don’t play electric guitar. Today, I will just be taking care of acoustic guitars and sound effects, which as a result, I will be quite free during this week’s sessions. I’m just going to be fighting against this cough, and accompanying the back vocals. Yet, I was the most exhausted of the group, so it was annoying.

Recording went well, Chris takes care of sound making, and gives much importance to the most precise details. Whether that be the use or position of the mic, or its tone or sound level. This is very exciting. Chemical, and also magical, contradictions are appearing in the songs, and new points of views are starting to emerge from various angles. Work is going well, we are done registering the basics for every song. Then, we listen to everything again, one after the other from the start, and pick those to re-work. Generally, in an ordinary recording studio, we end each song one after the other. But in this recording studio, we come back to songs after recording is already finished and adjust their feeling and groove; it’s a very original process. I cannot leave details aside, but above all else, I make sure it goes smoothly. And it is also a work needing help from a wide network of people who have to be meticulous in paying attention to the sound fluctuation and intensity.

Since I write about the same thing all the time in the recording diary, from now on, I intend on introducing to you the Gotch Band members. They all have a particular charm and originality. Each of them produce splendid music, and I also wish to share it with you.

I met the drummer Mabanua in Gunma prefecture at a live concert with singing. He already caught my attention prior with his releases, but we met again by chance. I remembered him and I told him, “I’d like you to play drums.” The second time, he accepted. I was very happy.
His charm consists of carrying sixteen beats and the essence of swing in the studio.  who stick with its 8 beats just going up and down. He shows an obvious thing in his performances : the intensity into the music which is not expressed in MIDI or Zeromasu. Moreover, he was of a great help to me since he can also sing.

Lately, he has become very popular in various places, making him very busy. There is a possibility that because of this, he might not be able to play with the band in the future. For now, we take advantage of the opportunity to create songs with this genius, who is acclaimed by many people without thinking about what could happen.

He is lovely and charming, but I feel like he has a toxic side; I think he’s a very interesting person.