On his brand new blog Gotch.info, Gotch talks about the recording session of his new solo album "Good New Times", where he tries to explain the studio mood, how things took place and gives more details about some songs recorded with the band The Good New Times. The following relates the recording during day 5 to day 8. 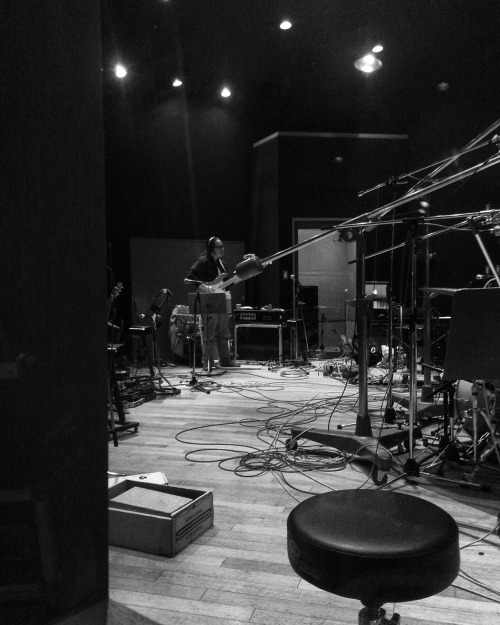 Today, we finished recording the basics; the bass and drum parts were all recorded using tape, from which provides a warm sound. Depending on the song, we will probably do the same for the guitar, piano, organ, and banjo samples. The process took five days.

Through this moment, which is not related to making music, but rather to a “painful sound” (a term I had learned from Hara-kun of the band Apart), we finally managed to make this recording studio a better place. When something is born there, it is accompanied by several aches and pains. But then, there is light at the end of the tunnel where joy is waiting for us; to free us from our chains. It is only because Spring is coming, like a blessing a blessing after a gloomy Winter.

How did I come to invite Togawa Takuma, also known as TT-Boy, to play in the band? Of course, I knew he was working with Isoboe’s band, HUSKING BEE, and Comeback my Daughters and I thought he was a good bass player. I even had the opportunity to attend one of his performances thanks to the help of The Chef Cooks Me. However, it wasn’t at that moment when I had made up my mind. It was only then that the idea to ask TT-BOY to help slowly came to surface. It appeared to be intuition for the long-term, so I asked TT-BOY to join my solo band.

Bass is a very important instrument; it is used as an intermediary between percussions and string instruments. When it comes to groove, I believe its role is similar to the catcher in baseball; the instigator. In the end, drums and bass form, for the most part, the skeleton of the band. This is why asking someone to fulfill this role is a huge responsibility. As far as I remember, I gave TT-BOY the order to play in a presumptuous manner, “Please, TT-BOY, play.” As a result, I had found a remarkable musician. I will congratulate myself for having this intuition for the band. Important decisions usually make everything, but this type of intuition is good.
From a music standpoint, TT-BOY brings the Gotch band the punk, hardcore, and emo essence. We create different types of music within the Gotch band, so it may be difficult to understand [to some listeners]. TT’s bass [style] can be felt as if it were taking the hardcore-punk approach.

His muscles look similar to a Sumo [wrestler] that had been training for twenty years. He brings to the surface a perspective as unique as Mabanua’s, but they’re completely different people.
He is also very meticulous about his gear. In the studio, he uses his own instruments, pedals, and amps. He’s a pure music lover, and I admire him for this; his physical appearance and his personality are very delightful. 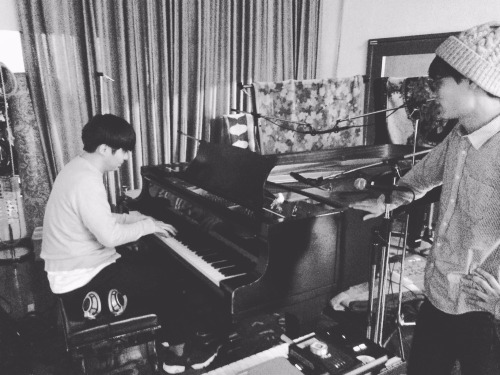 Symoryo not only works with Ajikan, but he’s also a part of the Gotch band. Very quickly, he contributed to my works, so it wouldn’t be an exaggerated statement to call him my right-hand man. He catches things quickly, and has good taste.

When we had met, Symoryo, given his negative nature and the fact that he was unfathomable on various aspects, has become healthier via [the album] “Kaitentai,” The Chef Cooks Me’s masterwork. He may have freed himself. From that moment on, I was excited to know what kind of music Symoryo will create next.

In his band, he has a lot of worries (regarding his band as leader), but with the Gotch band and Ajikan, he brings some balance. He plays his part very well, in a way that he doesn’t limit the music, or limit his parts to simple parts. His consideration for music is part of his appeal.

He is sensitive, serious, and cute. To tell you the truth, he is pop. That’s the type of person he is. Today, it was Inoue-kun’s guitar recording session, turntable films leader. He had won everyone over with his unique style. From his noise work to his genuine style of play, we hear an incredible, and diverse performance.

During the guitar session, we also recorded the gong track. It was my first task that wasn’t vocals. After the third try, we were done; we recorded a good gong sample. Now, it was time for guitar dubbing. That day, we recorded Satô Ryô-kun’s guitar parts, while I took care of noise parts. Since Chris’ ideas, the producer, are all interesting, we had fun in the studio. I was also glad that all of the extra equipment that we had bought before entering the studio were also a big part of the process, even though it was unnecessary spending. 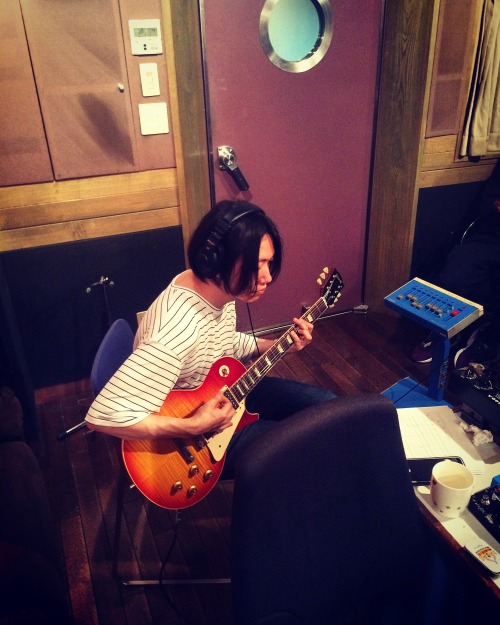 I met Ryô-kun the day we produced The Chef Cooks Me. At that time, he played the electric zither, but I remembered that he had some trouble with the complex adjustments of the instrument.
We worked hard until five in the morning. But I, who had just finished my solo album, had something that was bothering me. Since I had just finished by composing samples, loops, and guitar sequences, I was worried about the repetition. I simply can’t keep playing the same sequence of a song.
To a guitarist, it is a difficult and boring task. This is why nobody had crossed my mind for taking care of this. I wanted to avoid thinking about the musicality in an organic way, like “No choice, we are going to do it again on a computer.”

Symoryo recommended Ryô-kun to me during that time. He is someone who doesn’t worry about loops and sequences, but instead, enjoys it. I was surprised, and had wondered if such a guitarist could exist, but Ryo-kun kept playing bothering loops and sequences apart from the team, and enjoyed it. The Gotch Band was greatly assisted thanks to the role that Ryo-kun had fulfilled.

I’m very grateful for him. He breathes spontaneity (we are similar to that), while being handsome (there, however, we don’t share the same grounds). He has a great knowledge of instruments and pedals, and quickly understood the pictures linked to stereo imaging (sound source localization). He is someone that you can rely on.

The simplicity and normal behaviour make Asian Kung-Fu Generation different from others Japanese bands. Their appearance on television is scarce and they are more concerned about their works than their image. Since the Fukushima's nuclear disaster, Asian Kung-Fu Generation is involved in favour of the definitive nuclear power stations shut down. Despite an agreement made with Ki/oon Records (Sony), the whole Asian Kung-Fu Generation's discography is financed by the band itself, allowing them to be musically independent towards the label.